Bustling Chinatown is home to the oldest Hindu temple in Singapore - the Sri Mariamman Temple.

Built in the Dravidian architectural style, Sri Mariamman Temple is the oldest Hindu temple in Singapore dating back to 1827. The temple is one of the most visited tourist attractions in the country due to its importance. of religion, colorful exterior and magnificent architecture. The temple is dedicated to the goddess Mariamman, who is said to have the power to cure plagues and diseases. The temple gate or gopuram is decorated with sculptures of gods, goddesses and mythical beasts. 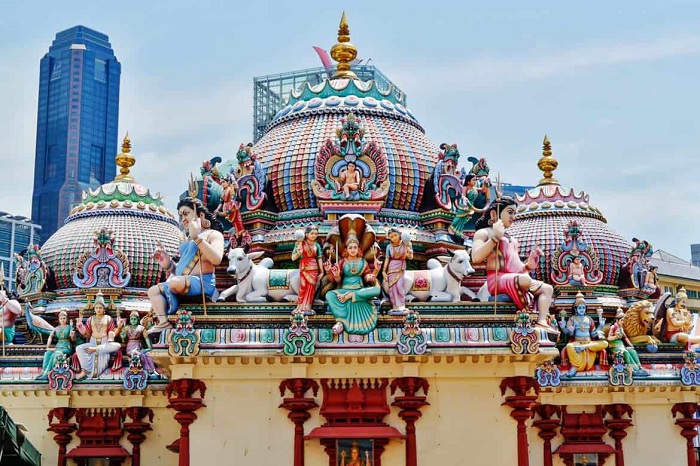 The history of the temple is closely related to Naraina Pillai, an Indian merchant. He was one of the first Tamils ​​to visit the island, accompanied by Sir Stamford Raffles, the founder of modern Singapore. As a capable businessman, he established a manufacturing business in Tanjong Pagar. "Do not live in a place where there is no temple," an ancient Indian warning. Taking the advice of his ancestors into consideration, one of the first things Naraina Pillai did was establish a temple. 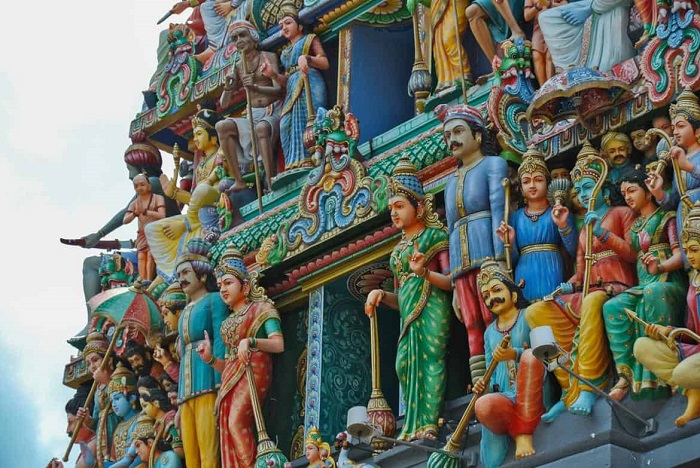 The temple dates back to 1827, when it was known as Mariamman Kovil or Kling Chapel. The temple has an original wooden structure and was built by immigrants from the Nagapatnam and Cuddalore districts of South India. Now the Sri Mariamman Temple is a national monument, much of the present structure is believed to have been built in 1862-1863 by Indian craftsmen. 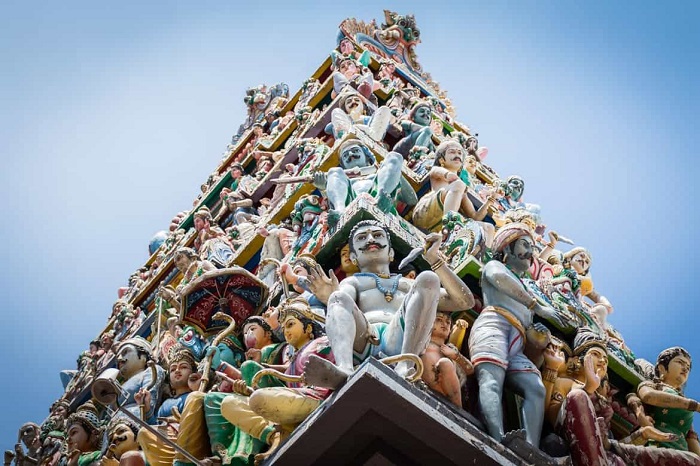 When you visit, notice the ornate and meticulous decoration of the inside and outside of the temple. The majestic Gopuram (entrance to the great tower) has been a landmark for generations of Hindus as well as Singaporeans. Its six floors are covered with sculptures of gods and mythical figures. Their fine details along with a variety of bright and vivid patterns make the Sri Mariamman temple  visually interesting. 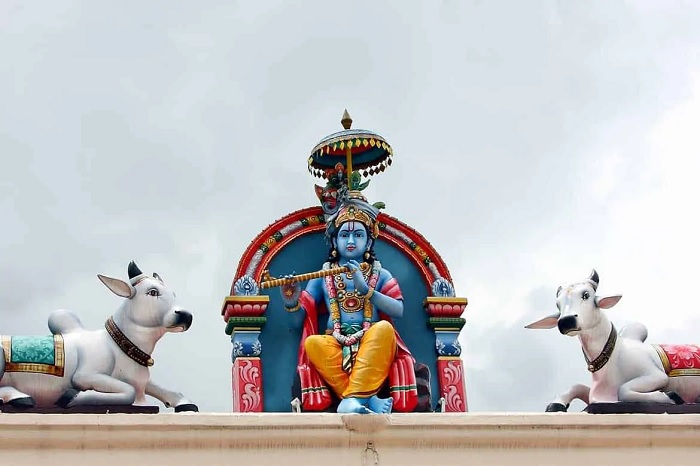 Krishna, the god of compassion, tenderness and love sits to the left of gopuram

Gopuram is flanked by statues of two important Tamil deities, Murugan on the right and Krishna on the left. This deity is the patron deity of the Tamils ​​and the Hindu god of war. On the other hand, Krishna is the god of compassion, tenderness and love.

What's inside the oldest Hindu temple in Singapore?

The colorful interior of the oldest Hindu temple in Singapore  is a feast for the eyes; Temple with majestic domes, statues of gods and paintings depicting folklore scenes. In addition to gopuram, Hindu temples include mandapa and vimana. 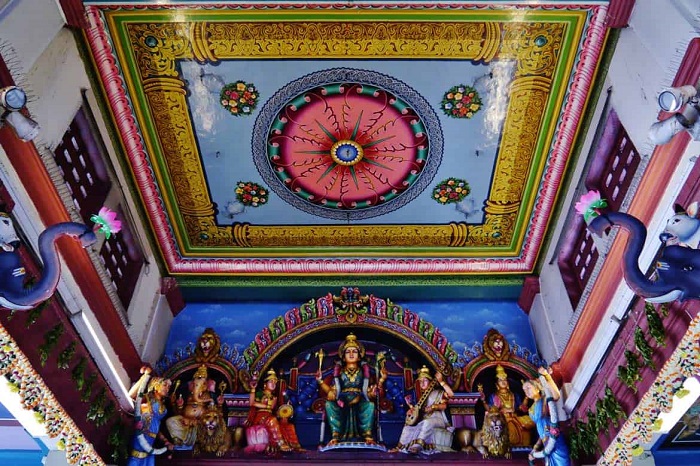 The Mandapa - full of energy and color

The main prayer hall of the temple is where devotees and priests participate in ancient rituals. Every day, they hand-picked offerings to the gods; Neem leaves & mango are symbols of purity and bananas, symbols of abundance. Before each major festival, a flag is raised in the mandapa of the temple to announce the preparations. 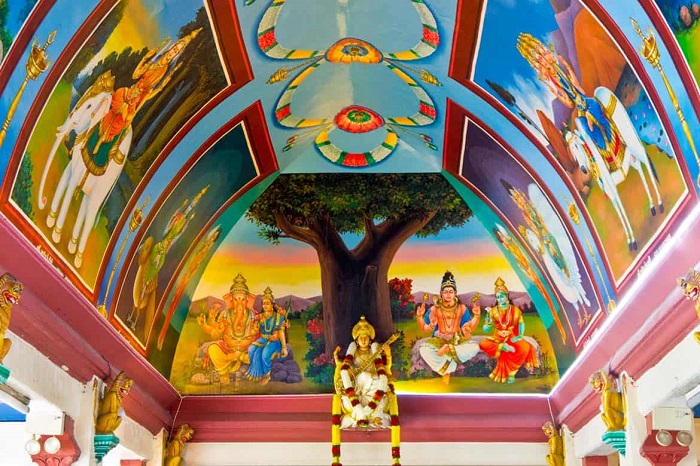 A passageway decorated with colorful frescoes on the ceiling connects the gopuram to the main shrines. A mandala symbolizes integrity, harmony and unity. A series of square columns decorated with sculptures of gods surrounds it. Three manifestations of the supreme deity are indispensable in a Hindu temple; Brahma is the creator, Vishnu is the preserver and Shiva is the destroyer.

In the main prayer hall, there are decorated onion domes at  the Sri Mariamman temple . These are called vimanas. Below the central vimana, is the shrine of Mariamman, the two minor deities Rama and Murugan. Essentially, worshipers "purify" themselves with water before offering their prayers to the central deity of the temple. 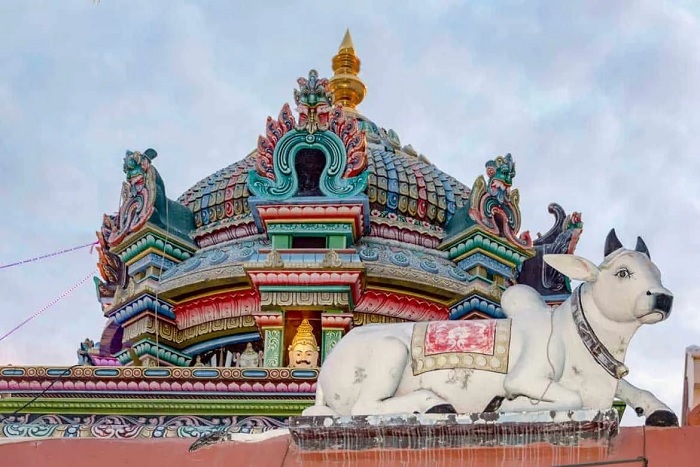 Sculpture of cows, an animal that Hindus consider sacred

Sri Mariamman, the main deity of the temple, is a South Indian folk goddess whose history spans four millennia. She is worshiped by the Tamils ​​as a bringer of prosperity and for the healing power of diseases, plagues, such as smallpox and cholera, that plagued Singapore's jungle environment in the beginning.

The temple welcomes people of all religions, genders or ages, however, there are a few things you should know before visiting.

All religious sites have a dress code and the Sri Mariamman Temple is no exception. First, you have to take off your footwear and store it around the door. In addition, you need to dress carefully, covering the shoulders and legs. The temple welcomes people of all religions

There is no entry ticket to Sri Mariamman. However, to take pictures of the inside, you need to purchase a photography pass that costs S$3 (or S$6 if you want to use your camcorder).

Thimithi Fire Festival is held a week before Deepavali (festival of lights). So, if you visit between mid-October and mid-November, you will have a chance to witness the festival. 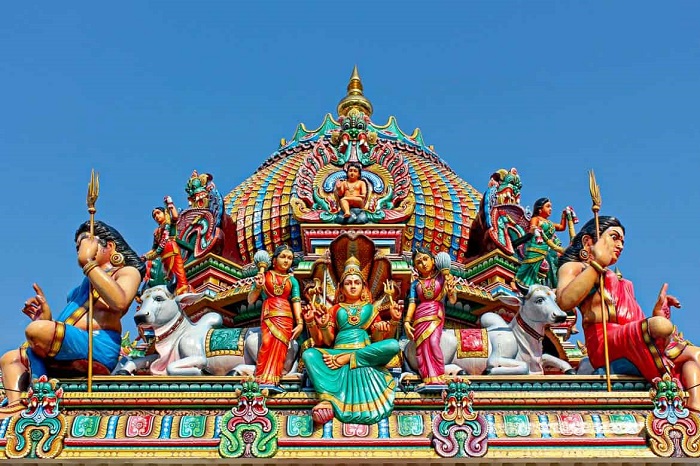 The main shrine's vimana is decorated with colorful sculptures

Sri Mariamman Temple adds an element of culture and history not only to Chinatown but to the city as a whole. This is not only the largest and oldest Hindu temple in Singapore but also plays an important role in local life.

Paradoxically built in the heart of Chinatown (even if Singapore has its own Little India district ), the Sri Mariamman temple fits perfectly into the country's multicultural atmosphere.