Ancient in appearance with impressive architecture by the poetic lake, Matsumoto Castle is one of the most complete and beautiful castles among the original castles of Japan, like a "national treasure"; It is an attractive destination for sightseeing and discovery.

For more than 400 years, this ancient castle has stood tall in downtown Matsumoto. Although built during the Warring States period, it never saw battle, and instead of becoming a symbol of war, it became a symbol of the people who worked hard to protect it. .

The castle is considered a National Treasure, not least because it is one of the few remaining castles in Japan. But also because of its beauty and unique construction. The luxurious black and white colors and the majestic Japanese Alps in the distance captivate both first-time visitors to Japan and seasoned castle enthusiasts. 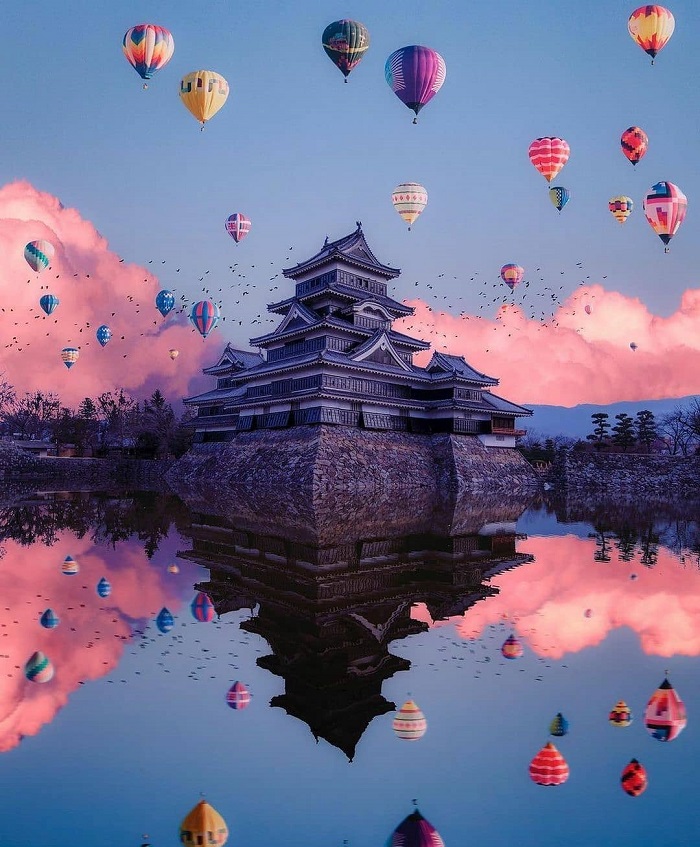 Matsumotojo's main castle and its smaller second castle were built between 1592 and 1614. Both of these structures were well fortified as peace had not yet been fully achieved at that time. In 1635, when the military threats were gone, a third mostly unprotected turret and another turret for viewing the moon were added to the castle.

By train and bus

- From Matsumoto Station, you can walk 15 minutes to the castle or take the local town express bus (8 minutes, 200 yen).

Matsumoto Castle Japan is about 12 minutes by car from the Matsumoto IC exit of the Nagano Expressway. There isn't much parking around Matsumoto Castle, so you have to park at one of the paid parking facilities near Matsumoto Station, such as the Parko building.

At first glance, it may not be easy to tell what is unique about this castle. To many people, most Japanese castles seem quite similar, such as the Japanese Himeji White Crane Castle . But if you take a closer look, you can see the ingenuity in its construction. 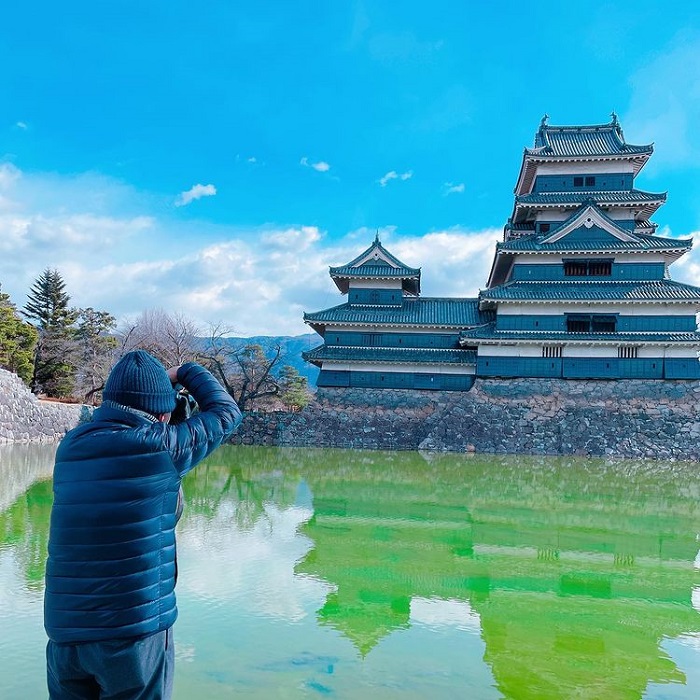 From the outside you can see that the main part of the castle has 5 floors, but when you step inside you will see that there are actually 6 floors inside. By hiding an extra floor inside the castle, it is possible to hide more troops than the enemy can see. You will also notice that the stairs are quite steep, they are built to prevent enemy troops from climbing up the holding posts. When climbing to the 6th floor, from here you can relax and enjoy the view of the city and green mountains. 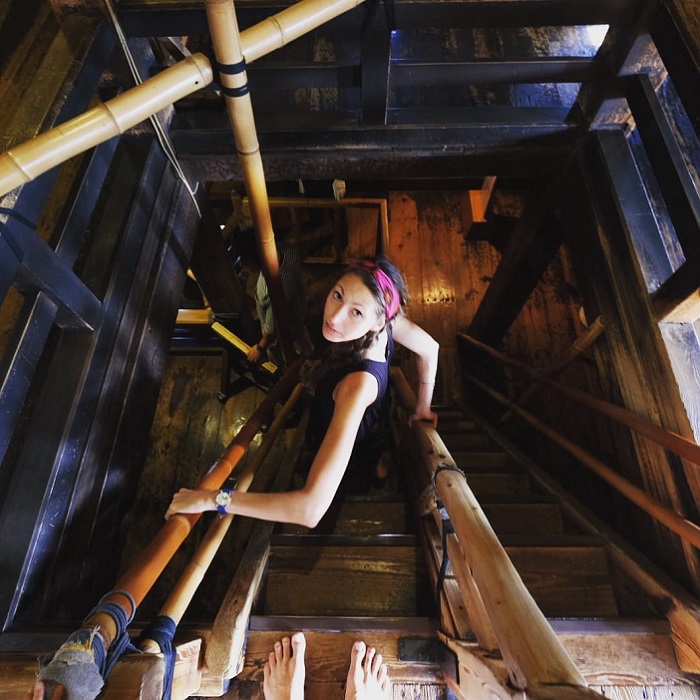 One of the most distinctive features of Matsumoto Castle is its two adjacent towers, built in two very different eras in Japan.

- The first tower was built during the Warring States period, its purpose was to protect the castle from invaders. It has many small windows for soldiers to shoot rifles.

- In contrast, the Tsukimi Yagura tower, easily recognizable by its bright red exterior balustrade, was built during the Edo period, a time of peace and its purpose was for viewing the moon. 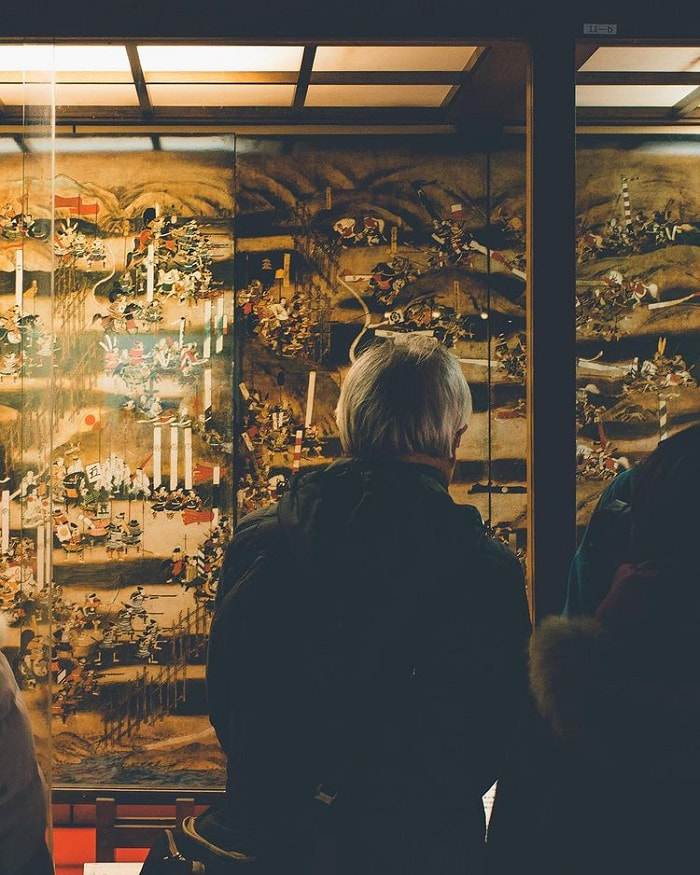 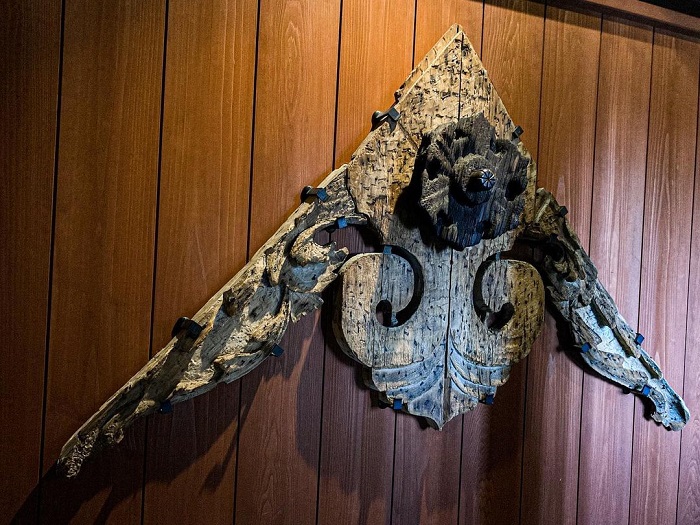 This castle is also a treasure trove of weapons and armor used during the Warring States period. As you climb the castle, you can see pictures of pistols, rifles, swords and other items used by the samurai over 400 years ago. It's amazing that such a wonderful collection of weapons can be found in a castle that has never seen battle. 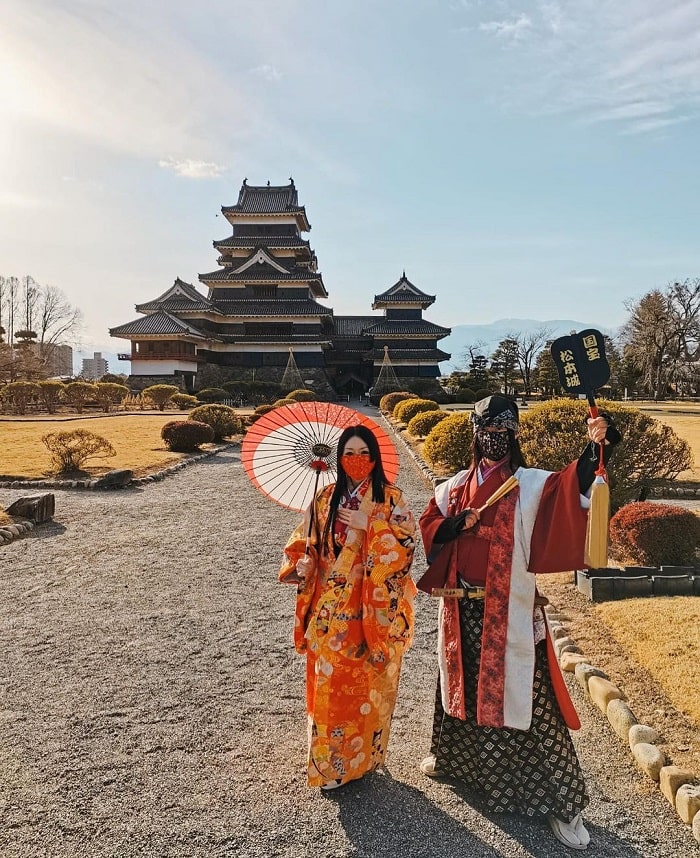 Referring to this castle, it is a center of Matsumoto's physical culture. Throughout the year, many Japanese events and festivals are held here.

- In mid-April, the cherry blossom festival is held here. Over 300 cherry blossom trees can be found around the castle moat and in its inner garden. You can enjoy it during the day with its splendid views of the Japanese Alps or at night, with its brightly lit trees and castles. 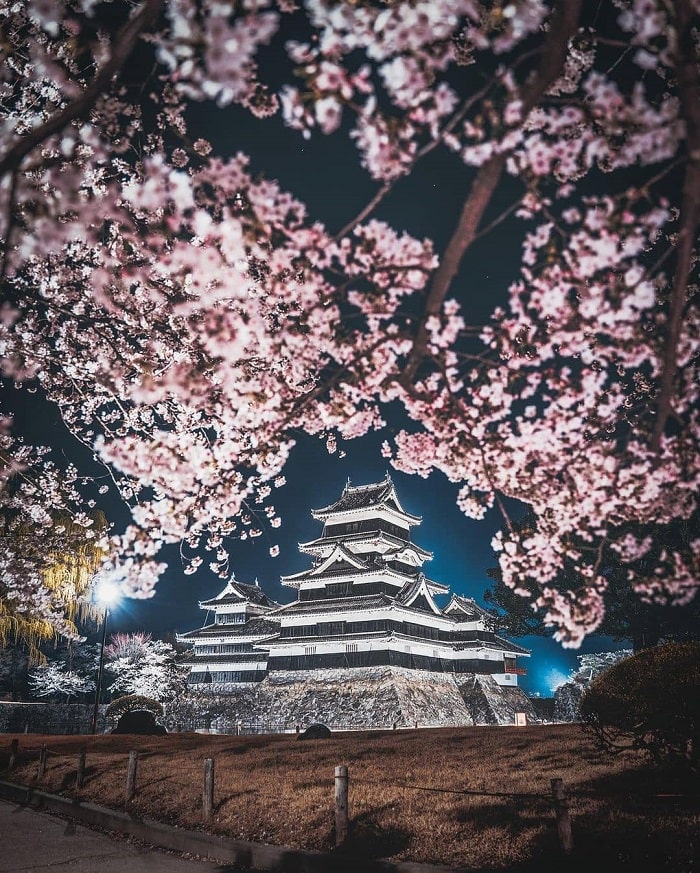 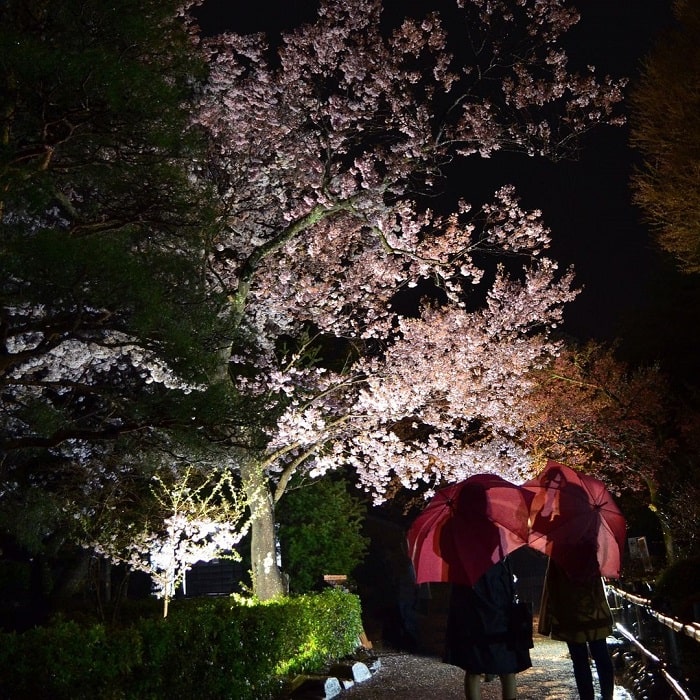 - The Taiko Festival is held every year at the end of July.

- In winter, you can watch the Matsumoto Ice Sculpture festival, where sculptors from all over Japan show off their ice sculpting skills in front of the castle. 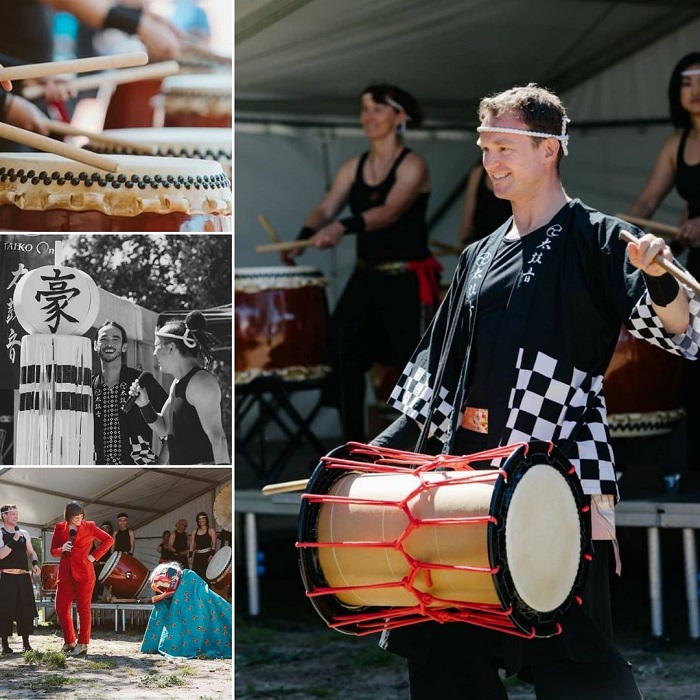 The city walls of Matsumoto Castle helped form the city of Matsumoto. Around there, you can find glimpses of the city's past. Some streets still retain the atmosphere of the old days in the castle town, with old wooden shops and terracotta warehouses. 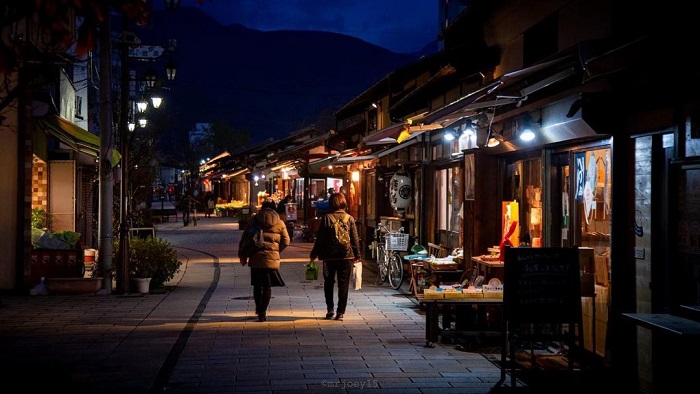 Right by the Metoba River (near the castle), you'll find two of the most popular streets for sightseeing. On the side of the castle is marked by a large statue of two warrior frogs Nawate-dori , or creatively known as "Frog Street". Just across the river, is Nakamachi-dori. Both streets are lined with shops and cafes where you can spend time and enjoy the cultural atmosphere of Matsumoto. 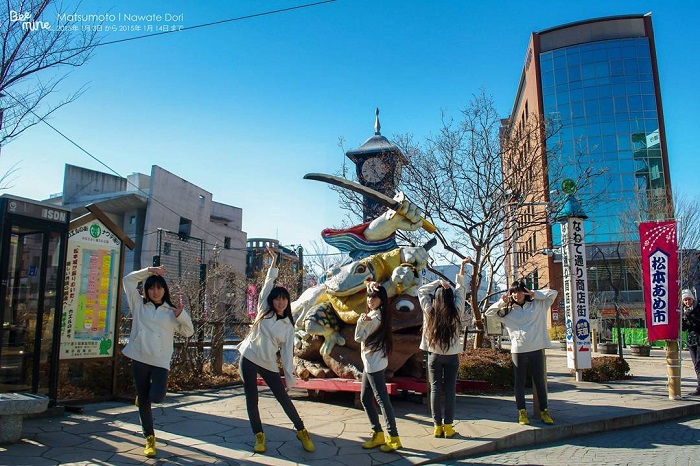 While in Matsumoto, you should also stop by the Matsumoto City Museum of Art. Here you will find a regular exhibition of the works of Yayoi Kusama, an internationally renowned artist also from here. Or check out the Ukiyo-e Museum for art exhibits to learn about Japanese culture in this exciting land.

Possessing a peaceful space and attractive scenery, Matsumoto Castle deserves to be the top sightseeing place in Nagano that you must definitely check in.