Skyscrapers are not a strange thing, especially in the current period of development, but towering buildings with mysterious features, plus a little "scary" are probably nowhere near the buildings. Where is Sathorn Unique house in Bangkok?

Located between Soi 51 and 53, along the Chao Phraya River, near Charoen Krung Road in the Sathorn area and opposite Wat Yannawa in Bangkok , Thailand, Sathorn Unique Building always makes people amazed by the ghost scene its me.

Back in 1997, it was an era that many Thais still vividly remember as a simple life, with listening to music from cassettes, taking pictures with the ubiquitous sticker cabinet, and conveying messages through the computer. texting..., but another important event that can never be forgotten is the "Tom Yam Kung Crisis" which greatly affected the Thai economy.

At this time, the buildings and houses that were abandoned because people at that time were in debt were uncountable, most notably the Sathorn tower , the full name is Sathorn Unique Tower , built in 1990. to trade in luxury apartments in the city center. 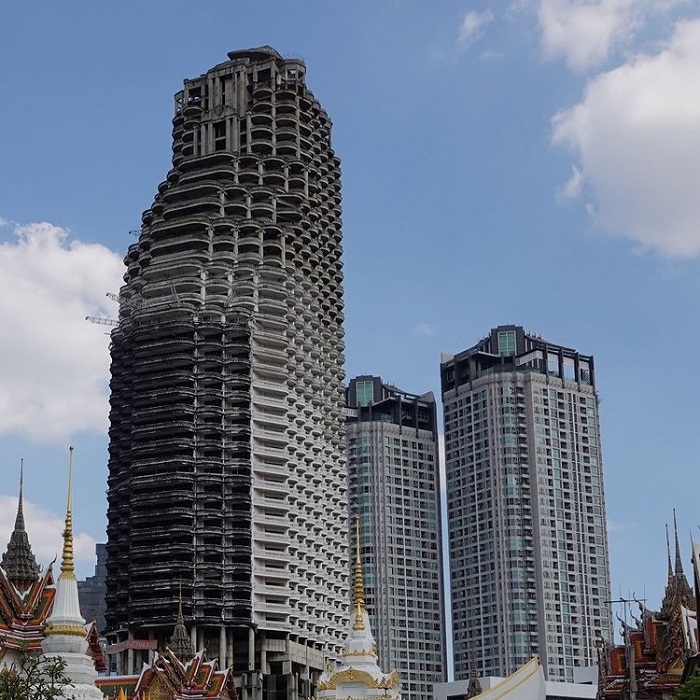 With a potential location as well as uniqueness because the designer is a famous Thai architect - Rangsan Torsuwan, this project attracts a lot of investors and enthusiasts. total investment up to 1,800 million baht.

But then Sathon Unique suddenly "stumbled" in 1993, when Mr. Ajarn Rangsan Tor Suwan - the head of the company was accused of hiring Wan to kill Khai Chansue - the chairman of the supreme court at that time, causing the organizations Financial institutions delay lending for fear that there will be problems.

After Achan Rangsan was detained for a few months and there was no evidence of guilt, he was released on bail, so financial institutions continued to lend. However, after 1997, the financial institution Tom Yam Kung closed after the economic crisis affected the construction capital of the building, so it was forced to stop operating.

The incident became even more "tragic" when in July 2014, there was a fire on the top floor of the Sathorn Unique building and in early December, fire control officers discovered it. that a tied corpse of a Swedish man was found on the 43rd floor, so it became known around the world with the rather creepy nickname ' Ghost Tower '. 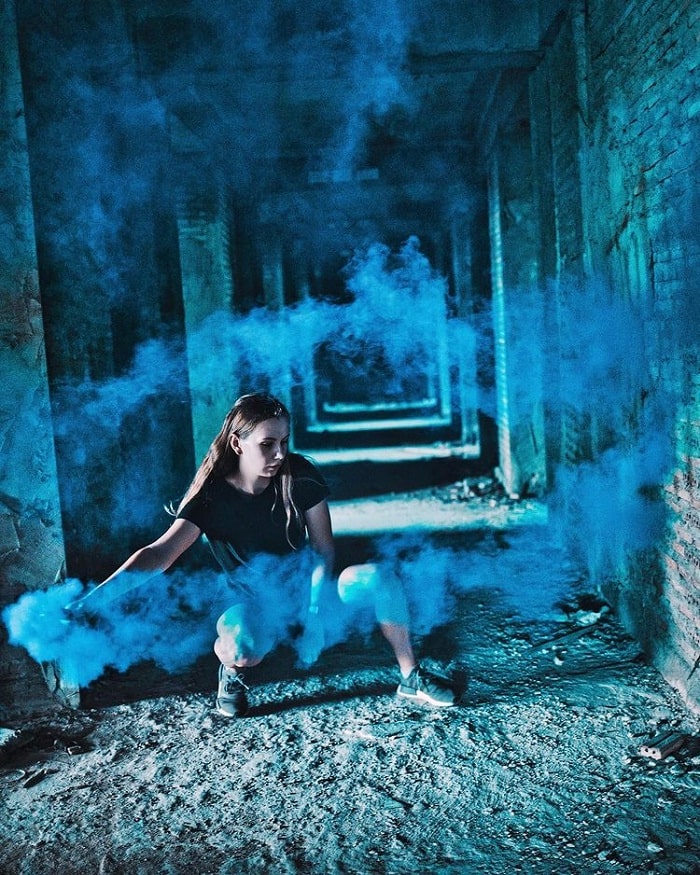 Currently, realizing the potential of the tower, many foreign investors have tried to solve it by agreeing and refinancing Mr. Pornit Tosuwan - son of Asst - who is taking over the project, but because he Pornrasit wants to sell the building at a price that can compensate the main investor and contracted customers in the starting project that has not yet come to a conclusion, and it is still the most mysterious abandoned tower in the heart of Bangkok. prosperous. 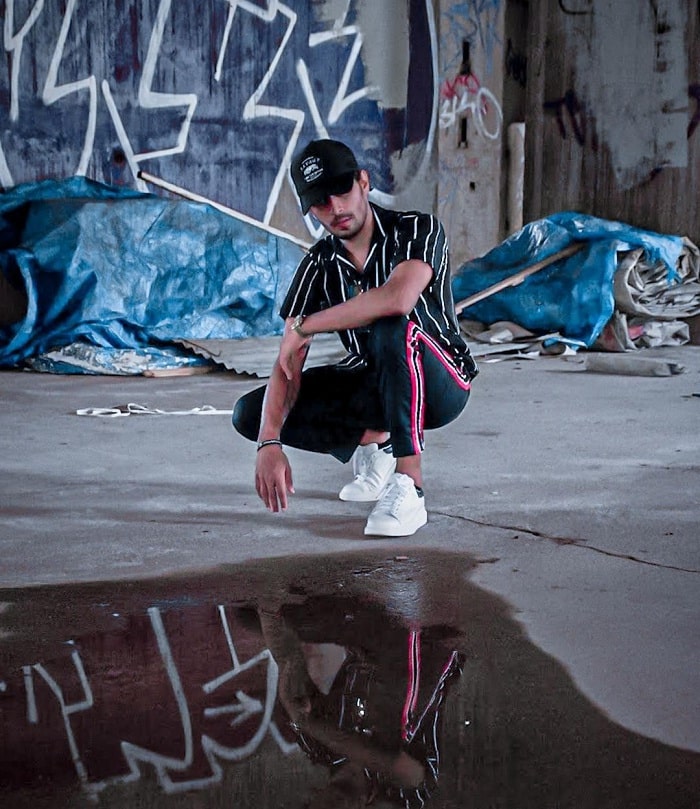 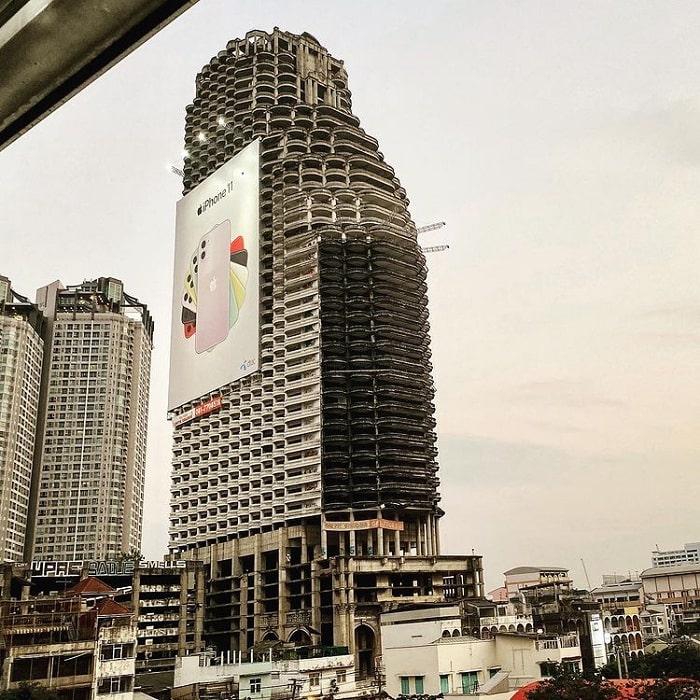 Standing tall in the heart of the city (Photo @jlsoille)

The architectural style of the Sathorn Unique Tower is similar to that of the State Tower built in the same period, with classical architecture in arched windows and roofs and the use of elements of modern Greco-Roman art. at the columns and terraces, creating a uniqueness compared to the surrounding works. 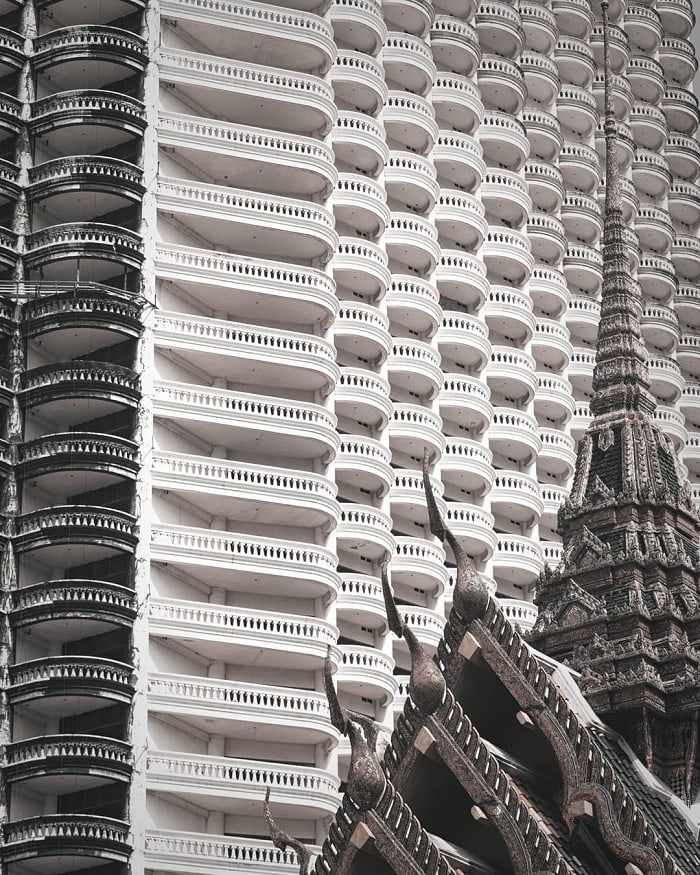 Before the entire construction was halted, more than 80-90% of the structure had been completed and the safety had also been confirmed. However, the interior design and installation of the infrastructure is just beginning as the walls and other details are still incomplete, especially in the upper floors of the building, so it is still very "wild". . 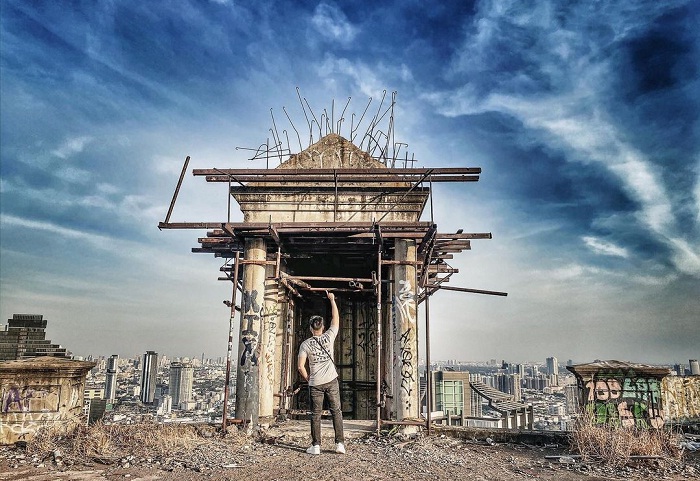 Many parts are under construction (Photo @mr.tun28)

Because it has been abandoned for a long time, the Sathorn Unique building is quite "lonely" and desolate, but it is that "cry forest" magic that has attracted many people who love excitement and challenges to visit. and take pictures. Especially in the dark night without light, or taking photos only in black and white mode, it will be as scary as Halloween. 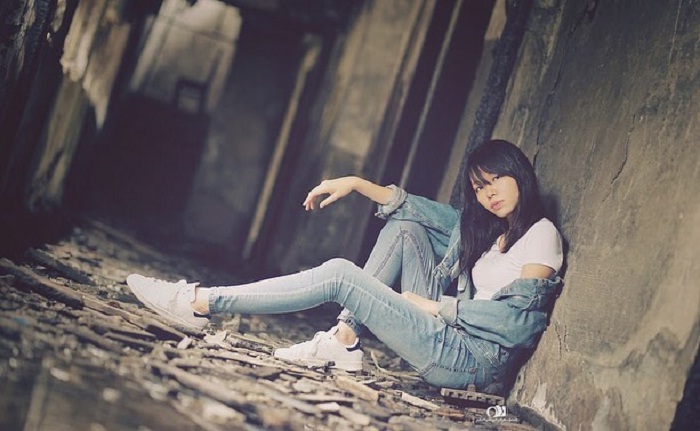 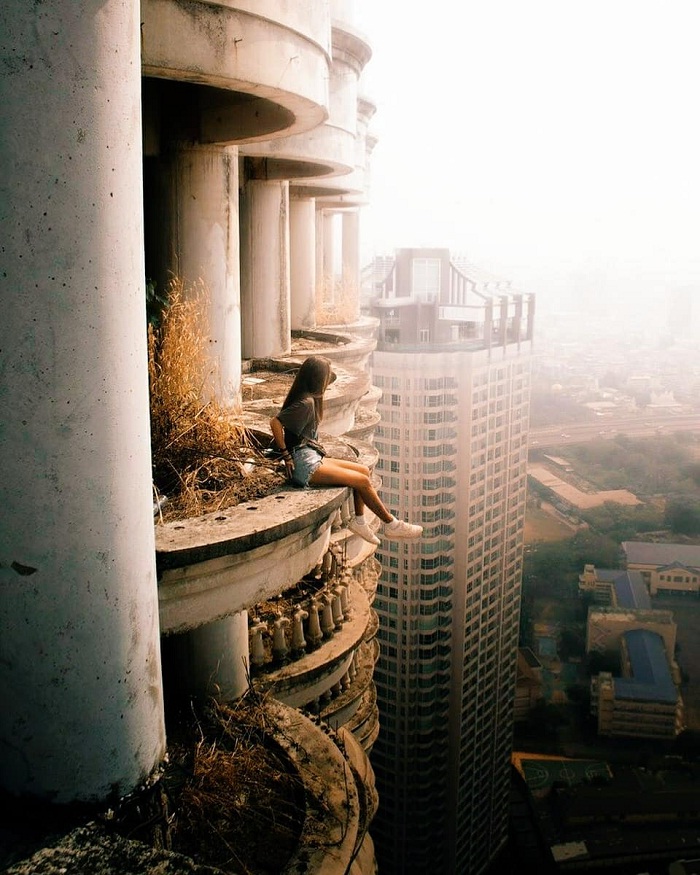 However, the most special thing and is considered a "charm to attract" people to sneak into the Sathorn project is not in the "cold spine" atmosphere inside but is the beautiful view from the upper balcony corners. 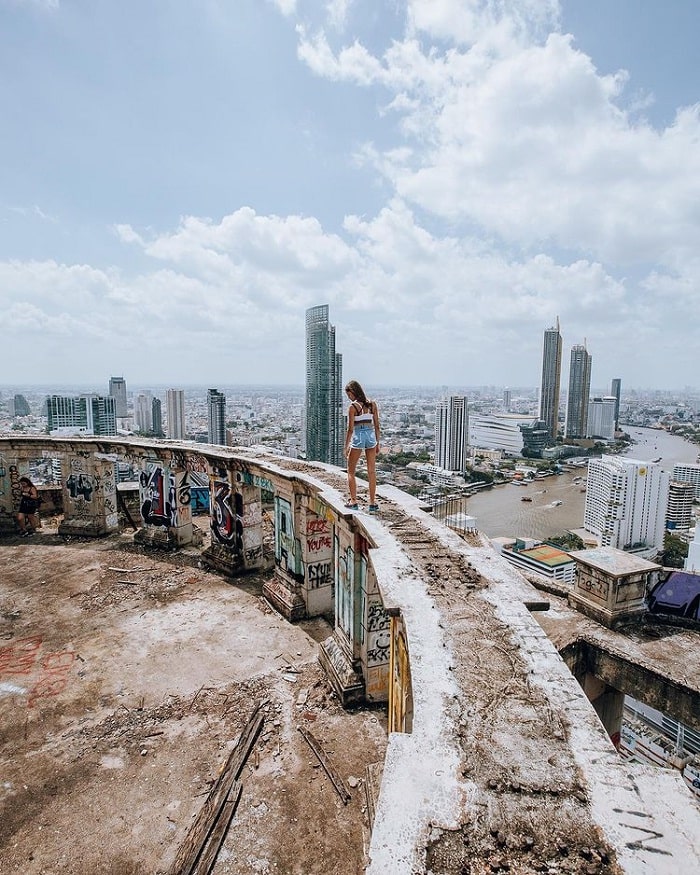 Standing here, you can not only "capture" photos with a very unique and artistic style, but also admire the entire luxurious and splendid scenery of Bangkok city as well as the gentle Chao Phraya river in Besides, there are very few projects that can be done. 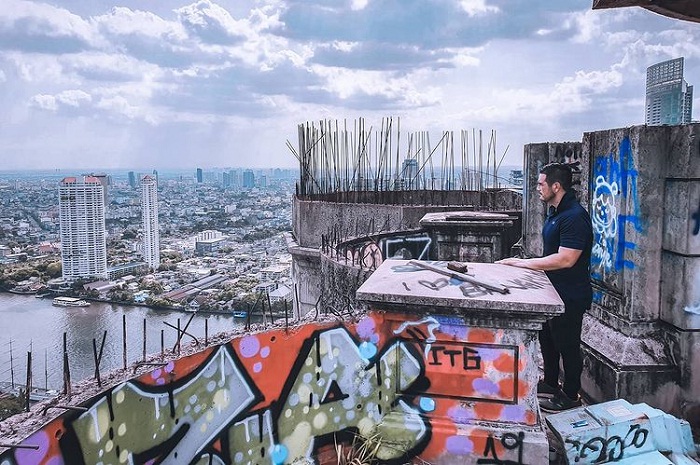 Beautiful view from above (Photo @jeromekimura)

However, always remember, the abandoned building Sathorn Unique has an owner and it is illegal to enter like that, if found you may be held accountable by the law. At the same time, this work has not been completed and has not been cared for for a long time, so safety cannot be guaranteed. Therefore, if you can't hold back your curiosity and enter, you must be very careful. 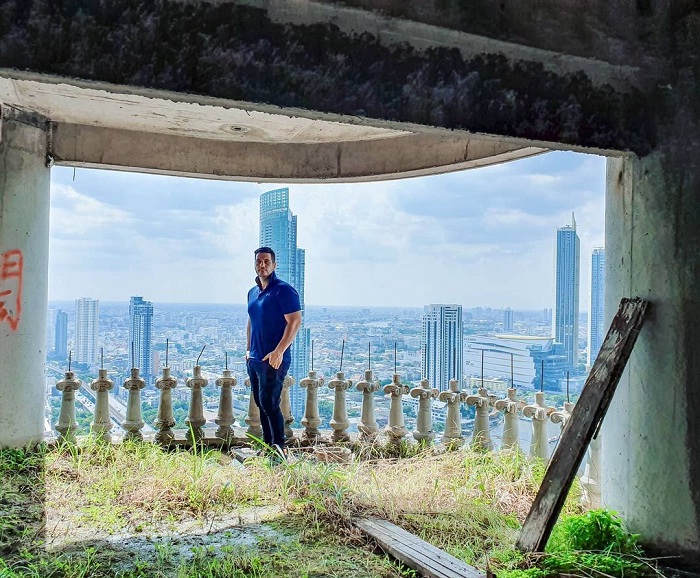 If you are someone who likes to discover new things, like to challenge stimulating things that few people dare to do, the Sathorn Unique building in the heart of Bangkok , Thailand is not a bad destination.